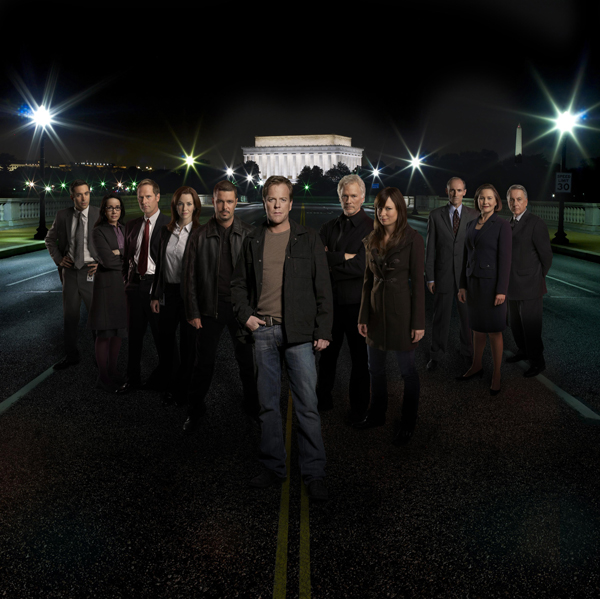 Above is the official Season 7 cast photo, since we’ve not had a massive amount of Day 7 news, I thought this might wet your appetites a little.

If your curious about who everyone is, click the “more” link for a full rundown on characters and actors.

From left to right.

Not a massive amount is known about the character, although the actor is most famous for recurring roles on Entourage and Ugly Betty

Another FBI agent, although having seen Garofalo in various other things Agent Janis Gold may well be the new character who most quickly makes a mark with fans. Garofalo had a recurring role in the final season of The West Wing

New FBi Agent No.3, Nordling has previous had roles in Once And Again and Dirt

Agent Walker will apparently have an “adversarial relationship with Jack”, although from the trailer it would seem she’s willing to unleash Bauer to get the job done, as suggested by the line “torture him if you have to”

Yes he’s risen from the dead to fight another day. Only according to the trailer he’s the baddie, debate has been raging ever since how long that will last, is it a early season twist waiting to happen? or will Tony be the first baddie ever to survive from season premiere to season finale?

Brought before congress at the start of the day as the poster boy for extreme interrogation techniques, but it’s not long before a new crisis means the government again needs his help.

Last seen commandeering a government helicopter to help Jack save the day, does apparently survive CTU’s disbanding to remain useful.

With a fanbase almost as large as Jack’s or Tony’s, there’t no way Chloe would be sitting this one out, not even having a baby can stop her.

Come January 2009 the show may again be one of the most topical on TV if the United States is indeed about to inaugurate it’s first Woman President.