Not too many hours ago, in Hollywood’s artificial New York, filming of “24” has come to an end. Never again will lights get switched on at the set of “24” – The Series.

Hope remains for those of us who’ll be left wanting MORE, as Howard Gordon hopes we will, as the movie is taking shape. But as far as the Series goes, the clock has tick-tocked for the last time.

Like you might have noticed in some of our previous posts, some of the 24 crew are present on Twitter. On “24”‘s final day, they have shared their thoughts, too. At a guess, the atmosphere on the set must have been quite emotional. Below are some Tweets and two final-day images courtesy of Rodney Charters.

“9 years ago, in 2001 I had just moved to LA and started watching 24 in my beatup studio apt in Hollywood and became a forever Fan.  9 yrs later, after 3 years/2 seasons 24 has again truly changed my life forever…here’s to the end of an era and to truly one of of the most groundbreaking, original and kick ass shows of all time!”

” Thinking about my 24 pals on their last day. I’m a better man having worked w/you all. Glad I’m not there tho. I cry best by myself ;)”

“I’m sadder today about #24 coming to an end then when I left over a year ago. I guess there was comfort in knowing it was still being made.”

The Lights go out on New York: 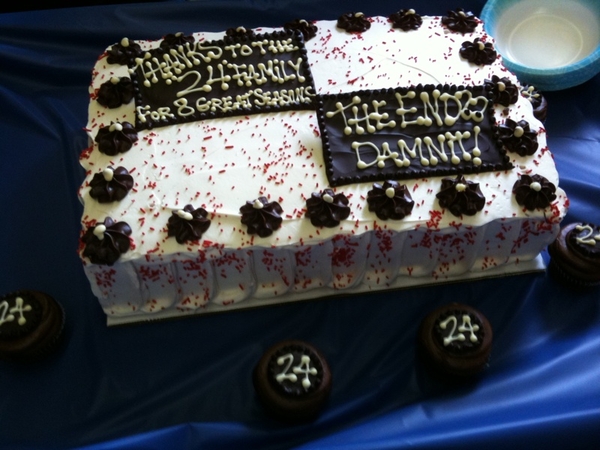 “I’m a little emotional this morning looking at your final pictures from the set. We all knew it had to end, but it still smarts.”
“Back at you Jon you were missed but very present if you know what I mean.”
“Thanks for that. I feel sorry for the crews we work with in the future, because they’ll have to endure hundreds of #24 stories.”

And I’ll give the final word to Rodney:

“4:00am my body cannot believe there are No More Wake Ups to a day of work on the 24 set, its a new day and a song bird is warbling outside.
It was emotional and memorable, thought of Jon missing it in TO, cannot comprehend the friendships & joy of work we will all miss sharing. Huge thanx to all Peeps who follow us I will try and post images from the set as the final shows are aired. Buy the Blue Ray or use iPad. List of visitors: Gary Newman 2oth Chairman Joel Surnow Anil Kapoor Glen Morshower speeches choked back emotion lotta lovin. Bye Kiefer.”